skip to main | skip to sidebar

One is the political Brexit, and that happened at the end of January this year.

The second is economic, where the EU and UK will begin to diverge.

That will happen on New Year's Eve.

I have made the point about two regulatory areas, and where they meet there has to be a border.

Dominic Raab is in the US right now, complaining that the EU wants to impose a regulatory border in the Irish Sea, breaking the UK Union. But that is what his boss, Boris Johnson negotiated, and he along with all other Conservative MPs, ratified on January 9th this year.

Anyway, where there is a crossing between the two regulatory areas, there has to be a border. The question is where you would accpe the border to be.

Dover operated at about 94% each day, we get used to jams and queues building up, for nop apparent reason. Maybe it was a French fisherman's blockade, maybe one of the customs or immigration guys has flu. Anyway, traffic builds up very quickly.

Yesterday, there was a serious accident on the A20 into Dover, closing the road and needing the air ambulance had to land to take the injured to hospital. Some traffic might have been delayed until today.

So far, so simple.

It appears that anti-torrorism police undertook either some training, or had a tip off. Anyway, they checked every truck heading through the port to France.

The A20 was first to be closed, though for a while the outside lane was open to cars, but that soon closed.

Then the A2 closed between Whitfield and the port.

That's the two main roads to the port and town, closed.

Other roads got very busy as folks tried to get round the jams.

The road through Lydden was closed to, this is the old A2.

Operation Stack was put into force, the coastbound M20 between Maidstone and Ashford was turned into a lorry park.

Mid-afternoon the police operation ended, and they hped to clear the traffic quickly.

Five hours later, The A2 between Whitfield and the port is open, but stationary. The A20 is open, but very slow. The M20 is still closed and has hundreds of trucks parked, if their phone data is correct. 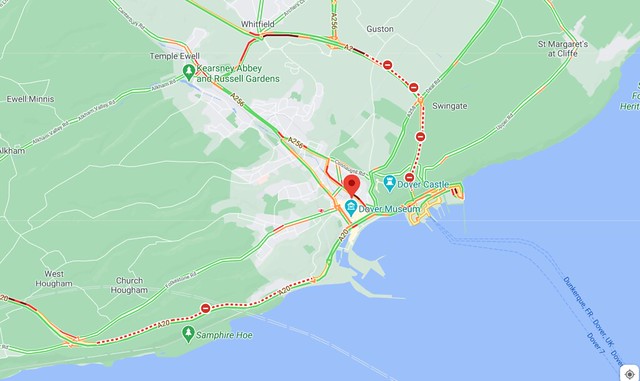 This was a eight hour operation that did not close the port, and has caused caos up to Maidstone, distrupted many people's lives, delayed freight leaving the country. Brexit delays will last months, maybe years without a trade agreement, what we saw today will become a "good day".

The UK Government's freight app will not be fully operational until June next year, at the earliest. They hope to have a beta version up and running in time.

THe Government has had four years to prepare for this, ever since may said the UK would be leaving the SM and CU. None of this should be a surprise, but it seems to be. Freight companies and businesses have been told to prepare, but they don't know what to prepare for, or what systems they will have to use, or if they will even exist.

There are real world problems for us in east Kent, who will have to try to carry on with our lives, let alone the economic impact of this grand folly.
Posted by jelltex at 11:54